“The Wall”, the well known Pink Floyd’s concept album, is on stage today - thirtythree years after the release of the movie directed by Alan Parker - with a new production of tremendous impact. 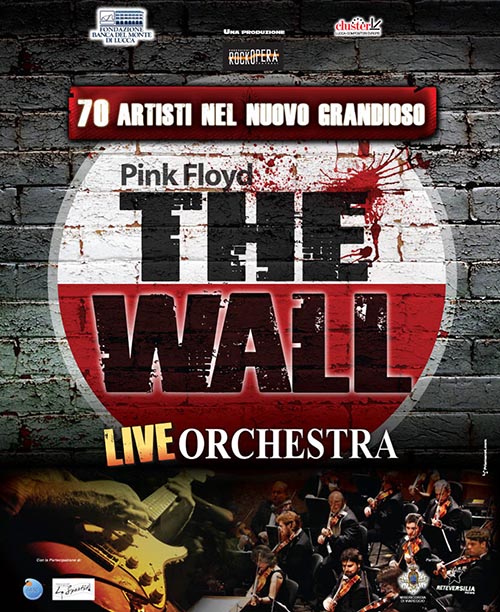 The main character, Pink, deals with themes such as loneliness, loss, war, alienation, success, that, like in a kaleidoscope, blend together with today’s issues, fears and uncertainties, in the era of crisis and globalization, of sudden climatic and political changes. On this new stage production, the monumental rock opera conveys a universal message: to embrace the great challenge of facing this wide variety of themes through a spectacular and unique live performance.
An impressive live orchestration, with more than seventy artists on stage, enhances the mix of rock and classical music, and takes the audience back to the original version of “The Wall”. The live videos, projected on a big rear screen, and the spectacular light show, add depth and emotion, drawing the audience closer to the performances of musicians and singers.

The sight of diversity

The Wall album was released on November 30th 1979 following the release of the single Another Brick in the Wall, a week earlier, which shot up the charts all over the world and was banned in South Africa and Korea for its subversive contents. The success of the album was equally great and over 30 million copies were sold, which is an incredible result for a double album.

The Wall is a concept album, a real rock opera telling the story of Pink, a rock star who we find in an endless, exhausting tour which is undermining his relationship with his wife. In his lonely days between shows, spent in aseptic hotel rooms, Pink, while trying in vane to get in touch with his wife, looks back at the ghosts of a lifetime: the death of his father in the war and the difficult childhood, squeezed between the overprotective mother and the indoctrination of psychotic teachers. His struggles and traumas will come back as metaphorical bricks, used to build a wall which isolates him from the real world. Pink will eventually face his inner monsters and tear down his wall getting back in touch with his fellow humans.

After over 200 gigs all over the country, the house band rightfully earned credits for the best Pink Floyd tribute band in Italy. It took time to reach the present standards. Over the years the attention to details and arrangements has become incredibly scrupulous: the sound, the vibe, the experience gained with hundreds of shows all gave their contribution to these impressive results. It’s been a long journey, starting back in 2001, when we decided to put together a stage production called “Welcome to the Machine”. It appeared clear from the very beginning that the main goal was to recreate the aura and the atmosphere of Pink Floyd shows.

The first performance, in August 2001, sold out straight away.The following 9 years saw the show touring endlessly all over Italy – in all kind of venues (pubs, theatres, arenas), each performance welcomed by enthusiastic comments and standing ovations – and the ever growing contribution of new musicians, singers and artists.
During the 2011 tour a new idea starts to take shape: it’s “The Wall Live Orchestra”.

The idea of taking The Wall back on stage with a full symphonic orchestra takes shape in 2012: the thirtieth anniversary of the album was looming and the fans were buzzing with excitement. We needed something different, a show where the reverence for the music and the original arrangements would meet the high impact of a full orchestration, where the skilful sound and light design would give everyone in the audience the possibility of feeling part of what was going on stage, with the aid of an expert live video direction.

That’s how we started to build up the idea: not the well known show, not something similar to many different shows: a new Floyd experience, mixing the Movie, the Album, a light show, a Live video show and - obvioulsly - live music!

Please contact us, you will find the answers you need.

You consent to the use of cookies by using our site. info